Moldovan Wine - A Labyrinth And The Tsar's Burgundy

Chisinau, the capital is a small city flanked on differing sides by bands of woodland.  On my arrival the evening sun sank into the shadows and did not appear again for the duration of my trip.  That was a shame because the pouring rain dampens my view of any city as much as it does my hair.  I spent much of my time in the city jumping between restaurants and taxis and taxis and restaurants.  Once inside the comfortable establishments I was extremely pleased to be buying wines aged over 10 and sometimes 20 years for as little £8.  The excellent imitations of Champagne wines from Milestii-Mici or Cricova tasted delicious.  The Cricova was especially crisp and nutty – a never ending pleasure where one bottle between four us could easily slip into three or four!

The food in Moldova was interesting.  I won’t over praise it but I will say that I enjoyed my meals of meaty river fish like pike, fresh earthy soups with chicken and dill.  One lovely Uzbeki meal of lamb kebabs, accompanied by more soups and several bottles of 20 year old Codru, a fine delicate red wine in the style of Beaune.

The highlight of the trip was a visit to the largest wine cellar in the world, some 30 minutes drive from the capital.  We hired a van for the day and after a 1-hour phone call between my friend (& interpreter / introducer) Taras and the Director of Milestii-Mici, we drove out to see this intriguing spectacle of 200 kilometres of wine cellar – an underground wine city! 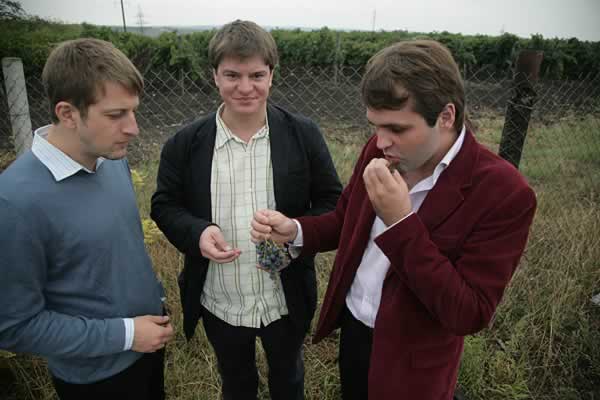 Our journey took us through the vineyards across countryside where vines stretched out as far as the eye could see.  The deep dark soils allow the roots to grow far down and many of the vines are well aged.  For this reason close planting is not a problem and bunches of grapes are growing abundantly.

Milestii-Mici from the outside caries the air of a Moorish sea port like Rhodes or Malta – quite odd considering there is no port and no sea, Moldova being totally landlocked between Romania and the Ukraine.  We hovered around our white transit van in the car park until the young ‘Commercial Director’ emerged as out guide.  The ensuing experience will keep me chatting about Moldova for quite sometime.

Rather than the usual leisurely stroll into a winery followed by a descent into the depths of the cellars where a fine array of barrels or casks would await one, at Milestii-Mici one jumps in the car and drives into a tunnel wide enough for two-way traffic.  At the Director’s instruction we then headed deep into the depths of the underground wine city, turning left in Sauvignon Street and Right into Pinot Street.  Each wine variety street hosted large iron tanks with wine aging in wine aging heaven.  The tunnels vary in their depth beneath ground level between 50 and 80 metres and are not well lit.  The atmosphere is dark and slightly damp with a perfectly consistent temperature and humidity.   They were recreated in the 1960’s as wine cellars after a rather obviously successful previous incarnation as a limestone quarry.  Driving up and down these streets and reading their somewhat ludicrous street names made me think of Knossos and Legend of King Minos.  This was reinforced by several large degrees when we stopped to admire an underground waterfall and a man came running out of a tunnel somewhat stirred.  It transpired that he was lost and our Director was immediately deployed as his escort to take him out.

Our drive resumed and we edged away further into the somewhat gloomy but gripping labyrinth.  At an unexpected point the Director instructed our driver to park up and we all assembled.  He walked over and opened a heavy gate.  Once through here we were in seriously surreal territory… the bottle store.  The lit tunnels, not wide enough for cars, seemed to go on and on and each enclave built into the stone corridor walls holds 1000 bottles.  We walked down passed offshoots of other corridors and stone cut tasting rooms.  Small homage’s to Bacchus appeared in woodcarvings and the bottles got dustier and dustier the further we walked.  One of the highlights was when Ion (the Director) stopped before a wall holding several thousands of bottles and then pulled a lever.  The door slid back on rails and he walked in saying “This is our special collection!” striding forward.  He stopped not too much further forward and gestured to the multitude of bottles of Negru de Purcari, saying, “Buckingham Palace buy these wines!”  I made a mental note to buy some myself, considering the Duke made the wise choice of serving Château Petrus at their wedding.

Eventually we boarded our transit people carrier and started to pull away.  I had all but thought the journey over until we were ordered to make a second stop.  We followed Ion through a large doorway off a typically non-descript tunnel and I was quite amazed to be confronted by a fine marble hallway, slightly opulent and with pictures of various dignitaries adorning the walls.  We followed Ion through to the rear where there was a row of large wooden casks over 20ft high.  Once again our rather serious guide pulled some lever or other and the said casks swivelled round revealing the entrance to a mysterious dining hall.  I was asked to proceed first and walked through a little cautiously.  Not bothering to look over my shoulder I was already in the room gazing about in front of me when two musicians burst into song with fiddles making me nearly shed a layer of skin.  My obvious alarm was accepted as the norm and we went further in to where around the corner lay a huge state dining area.  It was quite a site to behold.  Ion had arranged for three barrels of wine for us to taste.  The first was the Sauvignon, the second the Cabernet Sauvignon and the third the wonderful desert wine made from Muscat of Alexandria. 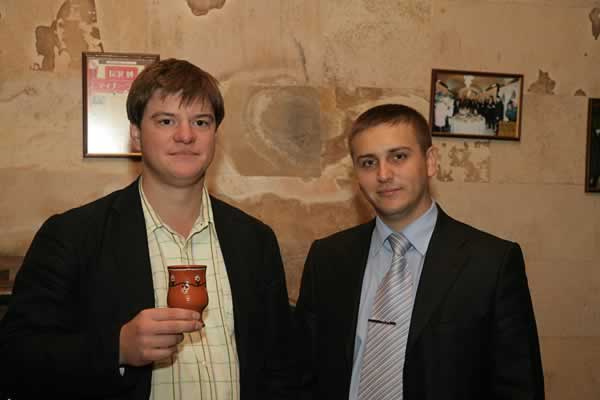 We stood and chatted about the wine and after several glasses of each and several more of each again I could almost say that I saw Ion smile.  And so he should, the wines were very good.  The Sauvignon was not the typical ballsy gooseberry style of New Zealand but rather (thankfully) more citrus in flavour with a nice balanced acidity that made the mouth water and the curve to my lips display outward signs of pleasure.  The Cabernet was again well balanced drinking with the taste of blackcurrent fruits and light oak rolling around the taste buds and a good bite of tannin on the finish.  As I mentioned above, I think the desert wine was really delicious with luscious honey and apricot flavours.

We signed the visitors book and lavished praise on our host as we straggled our way to the cellar shop.  Here I picked up examples of everything I could lay my hands on despite only being able to bring 4 bottles back with me to the UK.

We emerged into the sunlight and our driver sped back to Chisinau with certain gusto – probably bored out of his mind by the whole experience.  I on the other hand was enthused, thirsty for more and ready for my next feed.