Galicia and the Rias Baixas, Awash with Alborino

Galicia and the Rias Baixas; Awash with Albariño

We drove south from La Caruna towards the Rias Baixas wine region in the Western Spanish region of Galicia.  I say Spanish with a light pinch because for many habitants of the region, they are Galego and not, in particular, Spanish.  But then, the landscape of Galicia is rugged and green and every bit as Atlantic coastal areas in Britain and Ireland.  The people here are ancient, they play the bagpipes and are very much people of the sea, fishing and singing. 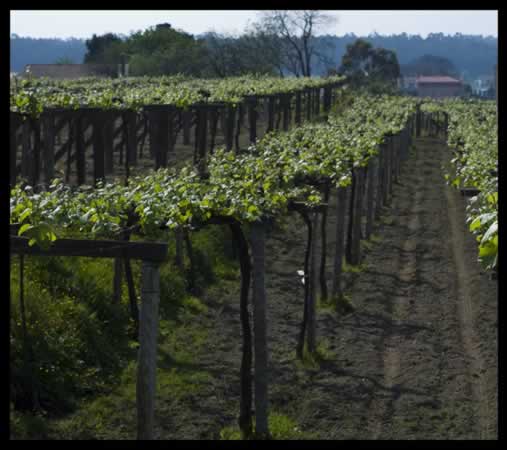 The motorway cuts down over beautiful dramatic forested ‘Rias’ (estuaries) that vary in their idyllic ways between something Cornish and something altogether grander and more remote in style.  It really is an eyeful.  We were heading towards Pontevedra where we had to turn off to Cambados and the Bodega of Pablo Padin where we were heading is located a short 5 minute drive up the road.  Had we more time I might of suggested a stop in Santiago De Compostella, the shrine of Saint James that every year welcomes thousands of pilgrims, however, on this journey my palate had detached itself from the theological environs of the brain and was taking us on a pilgrimage of its own. 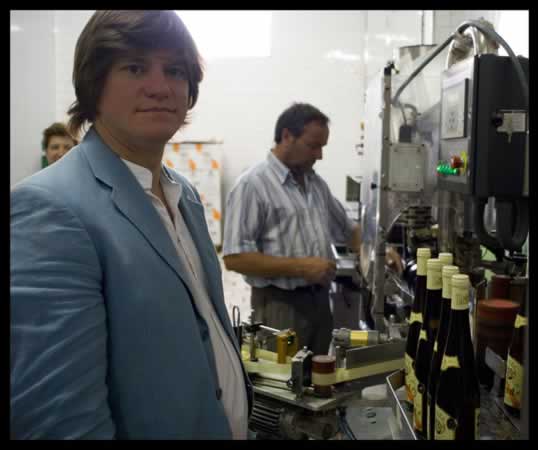 Entering Rias Biaxas one immediately spots the vines growing in just about any place where a root might grow.  The famous wine of the region is, of course, Albariño and this grape variety has achieved a high status throughout the world as a high-class contender when it comes to white wine. I was literally tapping my foot with the excitement of reaching Pablo Padin’s bodega. As we entered the thick of the vine infested lands, my brace of Galego’s (both friends but one as translator and the other a photographer) and I bickered with anticipation as to which way we should turn until the sign that clearly read, “Pablo Padin Bodega 250 meters” shone in front of us. 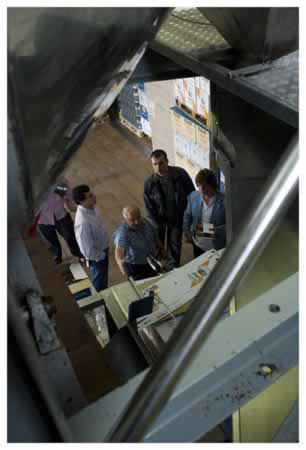 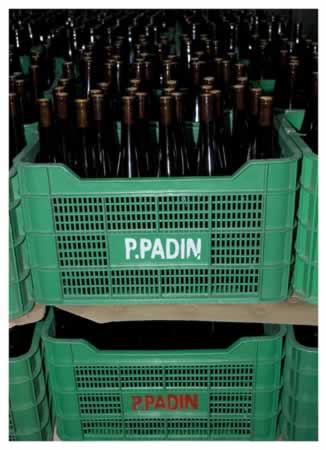 On our arrival we were welcomed by the manager, Felix who said that Pablo and his son would soon be with us to initiate the tour of the winery.  In that time we viewed the three varieties of Albariño that are produced there. They go by the name of Segrel and there is an “Especial”, then a second wine and finally a third table wine. Albariño itself only started to really gain its reputation in 1984 and was greatly bolstered by modern wine making techniques that have driven the quality of the wine that is now on offer. Whilst chatting with Felix, a small unassuming man entered the room and joined the discussion. This older fellow was in his sixties and spoke in a heavy tongue making references to the wine. Ricardo, translating made a seamless shift from Felix to the old man I deduced that this must be Pablo Padin.  We shook hands and he carried on discussing his wines. 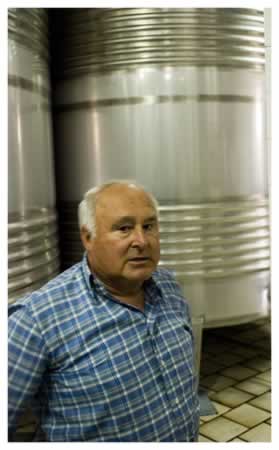 He said that in the late seventies and early eighties they only produced wines for local domestic consumption but when the winemaking methods improved and international markets started placing orders, wine production went up and hasn’t stopped. This year they will produce 450,000 bottles of Albariño and it will all be sold. In fact, due to demand, they are now bottling the wine earlier as demand is growing so strong. 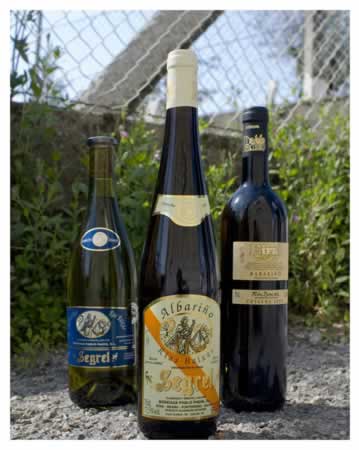 Pablo’s son, Pablo Jnr soon joined us and thankfully he spoke reasonable English so I was not so dependent on Ricardo. We crossed the road to another building where every September over 100 local grape growers turn up with their grapes to sell them to the winery. Pablo said that they have to queue down the road with containers of grapes whilst they are meticulously inspected.  Prior to this, earlier in the year, Felix and the two Pablo’s will tour their producer’s parcels of land, determining which grapes will become the especial and which will become the second and third varieties. During these visits they will be looking at the level of acidity in the wines and also the degrees of alcohol that they are likely to produce in the wine.  The quality control is so strong that each grower firsts inspects the grapes in the sure knowledge that they will be inspected again at the winery. Not one substandard grape will enter the press. 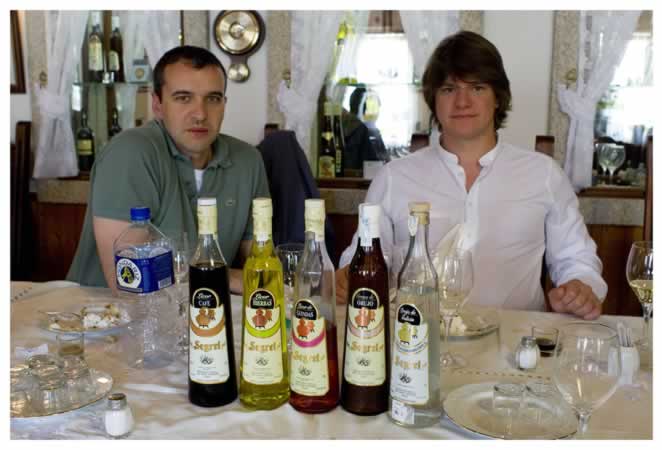 Once the grapes are on the conveyer belt they enter a journey that takes them through the maceration tanks and then through pipes underground and across the road to huge steel containers where the fermentation can take place at between 10 – 16 degrees C. Pablo led us back across the road into the cool room where a large number of these specially controlled tanks stored the wine. We looked on chillily but longingly. The whole winery ran like clockwork as wine was only taken from the tanks when sufficient orders required that it need be bottled. This procedure ensures that the wine maintains it signature freshness that resonates on the tongue and sends scores of endorphins rushing to the brain.

After a brief demonstration of the labelling machine we headed back out into the fresh air where a lovely heat of about 26 degrees C. enveloped us. Pablo led us a short way up the road and through some enormous gates to where he lived.  We all stopped and chatted and as we did we breathed in the scenery of vines and distant green hills against the all too welcome blue sky. Pablo smiled and uttered in Spanish, “I live better than a King here, this is paradise!” I hadn’t yet tasted his wine but I was certainly coming around to his way of thinking. 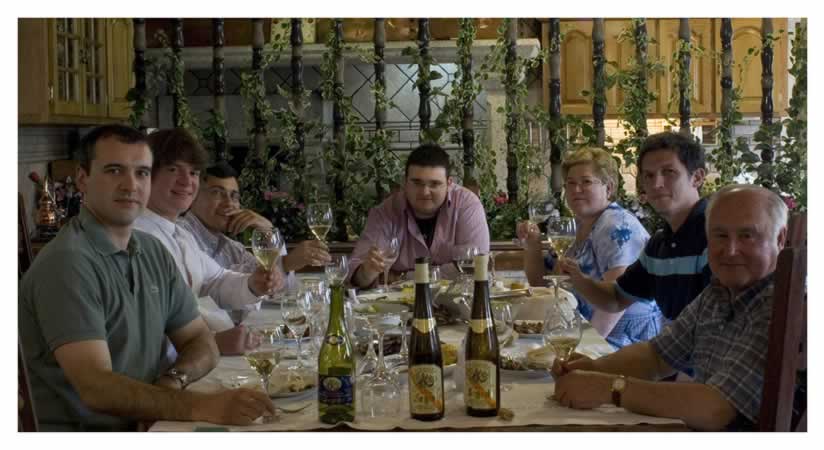 He led us to a large long annex that was actually a great dining hall with a bar at one end and large simmering oven at the other. He cut some ham and cheese then opened three bottles of the especial Albariño and poured liberally. The wine itself has an attractive straw colour and the aromas are strikingly of peaches. I started tasting and immediately noted with satisfaction that peaches were then joined by hints of banana. Pablo refilled our glasses and we made our way slowly to the long table. As we were seated he said, “I hope you have no plans for the rest of the day.” We gestured to the negative and he continued, “I like my lunches to last for six hours… but my record is nine and a half!” We all smiled and his wife then furnished the table with mountains of large prawns and langoustines and a command to eat. The ‘Segrel’ Albariño and the food presented to us are very much a match made in heaven. Pablo explained that the name of the wine, ‘Segrel’ refers to the old troubadours that used to roam the areas. ‘Segrel’ was not a name of one particular troubadour but instead the kind that liked to sing; “very appropriate!” thought I!

The first delicious was devoured and then replaced by the same quantity of clams in a rich sauce. With every mouthful of food I noted that the wash down of wine was creating a marriage in my mouth for which I am still very grateful.

Pablo Junior stated that if you live in Galicia then you had better like seafood and you had better like Albariño and how right he is. We had a fantastic lunch with a course of various red meats and a large desert with liquors made from the Albariño must. Before parting for our Parador in Cambados, we expressed our gratitude to Pablo and looked forward to our next late long meal that was to run into the early hours.

Flights to Galicia. In the past I have always flown to Santiago De Compostella but from London one can now fly from Heathrow to A Coruna

Where we stayed: We stayed at the Parador in the beautiful town of Cambados.

Notes on the Salnes zone of Rias Biaxas:  The region has a designated wine trail that is clearly signposted for the true aficionado.  You can pick up this trail and be welcomed in by a large number of participating bodegas.  Remember that this is the seafood capital of Europe and most of the world, so do indulge - the wine is the perfect accompaniment.

On the first Sunday of every August, Cambados is host to the Fiesta Del Albariño, at which the wines are judged by experts and also shared with the public. This event is now an institution but was started from a dispute between two producers as to whose wine was the best. His is a typical display for the passion for quality winemaking in the area.

Word of warning: The Galego’s are very hospital and one may easy find oneself eating and drinking way into the early hours of the morning. It is important that every plate is cleaned and every bottle emptied to show full appreciation!