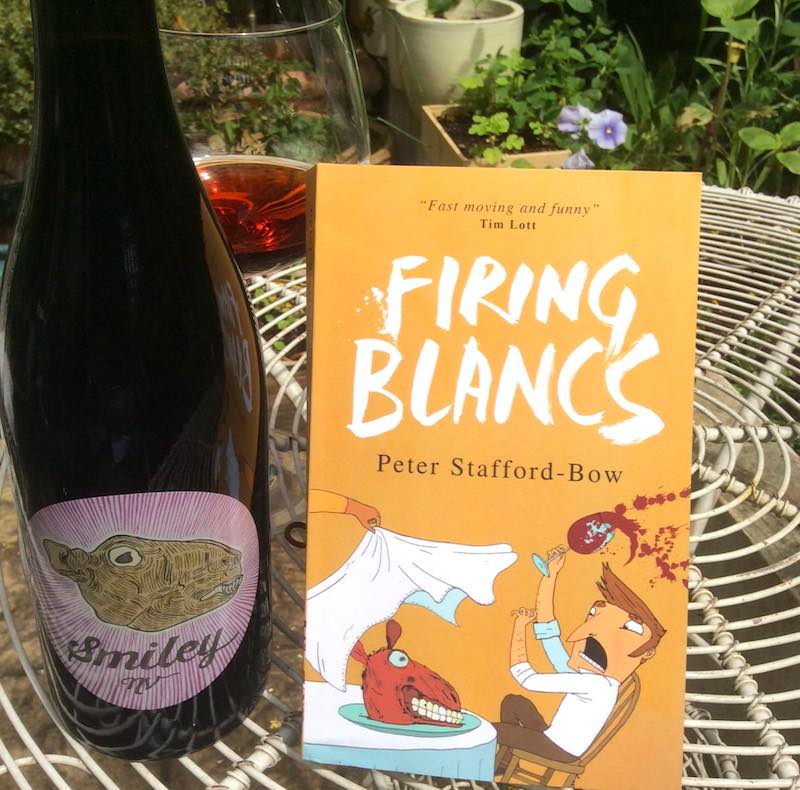 Honey-traps, blackmail, embezzlement and fine wine? It can only be Felix Hart emerging in what now counts as a trilogy of semi-fictional adventures by pseudonymously named Peter Stafford-Bow.

The key component of Stafford-Bow’s writing is that he embeds the reader into his journey so much that we share the wine, the pain and the hilarity. As ever in this volume, Felix imbibes his way through a never-ending trail of horror stories and ill-fated circumstance with a life-saving determination to get to the end.

Interestingly this time, the subject of fiction holds a mirror to the current wider societal and wine industry discourse, that of racial equality. That gives this book a poignant edge without compromising on the genre of writing.

I very much enjoyed the book both for the sharp humour and poignancy of subject, as much as for the diving headlong into South Africa’s landscape, wines and people.

In the interview below he speaks more seriously about the books subject matter, how comedy deals with difficult issues and also offers us the perfect wine pairing for our own expedition between these fast-moving pages.

To see Felix Hart immerse himself into racial issues seemed like a left-field but serendipitously relevant topic for current fiction. How close to personal experience is the South-African storyline and, in this context, what do you think of the wine industry’s response to the BLM movement in the last couple of months?

I wouldn’t have dreamt of satirising such an issue without first-hand experience. I lived in the Cape and worked in the South African wine industry for two years, while the main plot of Firing Blancs, which features a potential PR disaster caused by a questionably-behaved supplier, is based on an incident that happened while I worked as a buyer for a large UK supermarket.

I think the BLM movement raises different issues depending on which country’s wine industry you’re considering. In South Africa, the wine industry is an extreme example of the legacy of apartheid. Pretty much everyone in a position of power, from vineyard owners to winery managers to those with purchasing authority, is white. As individuals, I found the vast majority of those people to be politically progressive and genuine in their desire to transform the country. But entrenched structures of power – i.e. ownership of capital, land and the means of production – means progress can appear dismally slow.

But at least South Africans talk about their issues! The squeals of outrage following Jancis Robinson’s recent (and very mild) criticism of the British wine trade does make you wonder whether certain people might need to adjust their blinkers. You don’t have to wear a white pointy hood in public to inadvertently contribute to an environment that excludes minorities, and you don't require a psychology degree to recognise that much of the British wine trade is a pretty exclusive domain. In contrast to the UK scene, it’s enlightening to see the robust conversation taking place in the United States, for example, the Master Somms’ swift retirement of the cringing honorific ‘Master’.

Taking on serious issues with comedy has proven to be an effective art form in this day and age. Given the deep societal introspection going on at the moment, do you feel the woke-ning of Felix in Firing Blancs can teach us anything, or it is just a happy coincidence?

Humour allows you to sneak up behind difficult issues and more gently unveil them to your readers, whereas more direct prose might appear too blunt and didactic. Identity politics is a very contentious issue, because it’s very easy for majority people (for example, white people in the UK or the US) to feel their own identity is under attack, when it actually isn’t. Hopefully, the humour in Firing Blancs works as a gateway to illuminate some very serious issues. Satire always involves an element of danger or transgression, and Felix’s cheerfully cynical take on the world is an example of that.

You have often stated that there is more biography in these pages than we might think. How much is that the case in this volume of the Hart adventures?

I’ve already mentioned that I have first-hand knowledge of working in South Africa. I’ve wanted to write a novel based in the Cape for a while now, because it’s one of the most fascinating places on earth – a truly multi-racial society, with enormous problems but a fundamental optimism which makes you feel there is hope for the future of the human race.

South Africa has featured strongly in the Felix Hart adventures and it’s a place that has been badly impacted by the lockdown. Could you name some Hart wine-tips that readers might want to get in order to drink along with one the journey?

I can do better than that! There’s a four-page ‘Book Club Tipple Tips’ section at the back of Firing Blancs (perhaps I should have placed it at the front) which recommends several of the Cape’s finest. If I only recommend one wine, it would have to be the incredible Smiley Red from Ryan Mostert at Silwervis, for reasons that will become obvious when you read the book!

Available from all major online booksellers including Indiebound.org