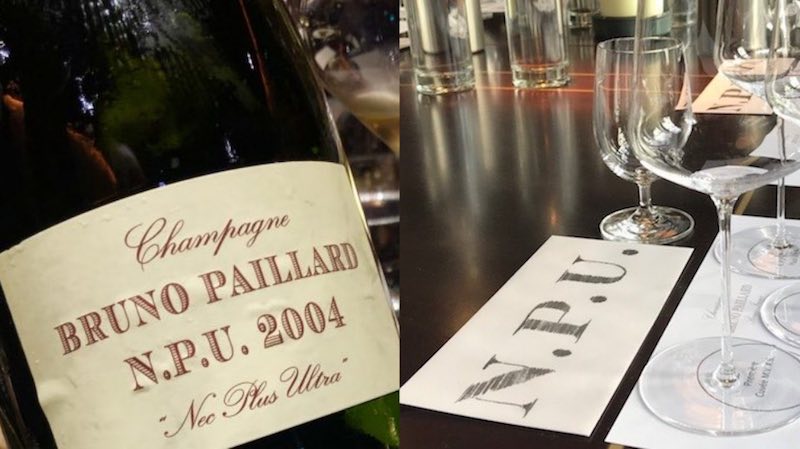 My favourite hotel remains Hotel L’Horizon, literally on the beach at St Brelade, Jersey. Location alone would make this a desirable hotel, but the amazing service from delightful staff and my introduction to their house champagne, Bruno Paillard Premier Cuvee, which became my favourite, affordable champagne, cemented it for me. Gone are the days when I would visit L’Horizon six times a year, but I only need sip a glass of Bruno Paillard Premier Cuvee and I am transported back to the terrace by the sea!

So the opportunity of attending a Bruno Paillard “Nec Plus Ultra” Masterclass, conducted by the enchanting and knowledgeable Alice Paillard, was not to be missed. The desire of Bruno Paillard is to create the greatest wine from Champagne, literally translated as “nothing more beyond”. Only seven extraordinary vintages have produced an N.P.U. 1990,1995,1996, 1999, 2002, 2003 and 2004, the latter only recently released . The advantage of 2004 is that it had more than the “magic” 100 days for ripening the grapes.

The grapes selected to produce N.P.U.  originate in  six of the seventeen villages in Champagne afforded the appellation “Grand Cru” – Oger, Mesnil-sur-Oger, Chouilly  Verzenay, Mailly and Bouzy. Each Cru is fermented separately in small old oak Bordeaux barrels. It is made from 50/50 Chardonnay and Pinot Noir but the quality comes no doubt from ten months in those small Bordeaux barrels before assemblage and ten to twelve years ageing on the lees. This is far longer than other Champagne houses and that the appellation requires. Its dosage is the minimum required at 3g/litre making it Extra Brut. Finally, Nec Plus Ultra remains in the bottle for two years following disgorgement which all adds up to significant ageing.

To limber up our palates we tasted Bruno Paillard Premier Cuvée. This is made from 45% Pinot Noir, 45% Chardonnay and 10%Pinot Meunier, a small portion of which is fermented in the barrel.  It is aged for three years on the lees and a minimum of five months after disgorgement. Its dosage is less than 6g/litre making it Extra Brut.  It also has the advantage of the addition of between 30 and 50% of reserve wine from up to 25 vintages.

Apart from the nostalgia, I worked out why this is my favourite affordable Champagne. The nose is so satisfying, a blast of citrus followed by hints of baked bread and berry fruits. Whilst being lively initially, it is subtle and gentle with such a long fine mousse that it caresses the front of the tongue, with the citrus giving way to stone fruit and berries – a delicate summer pudding without the sugar! Bruno Paillard Premier Cuvee reminds me of a charmingly, seductive, mature Frenchman or woman with whom I should love to while away an evening. I could drink this all day as an aperitif but until a few weeks ago, I had never tried  Champagne with creamy cheeses and now Iknow that this would go beautifully with one of my favourite soft cheeses  Brillat Savarin, L’ Explorateur or Rocamador.

To complete the “warm-up” we sampled Bruno Paillard Blanc de Blancs Grand Cru. Oh the delicious Chardonnay lemony nose, with hints of toast and almonds! On the palate, lemon sherbet with a great minerality with a wonderfully creamy mousse and a hint of pear that lasted for so long. Apart from making an excellent aperitif and pairing it with the obvious shellfish, I would enjoy its minerality with a smoked trout mousse.

Finally to the star of the Masterclass: Bruno Paillard Nec Plus Ultra 2004.

Its nose is initially Chardonnay dominated with citrusy lemon and lime. As it opened, I could detect hints of honey, apricot and melon and just a touch of fino sherry at the end.

Taking the first sip was an explosion of lemon sherbet, but wait, wait, wait. After a full minute, the bud of flavour started to unfurl rather like those Beadlet Sea Anemones, that close when you brush against them in rock pools and you have to wait for them to open slowly to expose their magnificent colours. The unfurling went on for a further minute to give the promised apricot, honey and melon from the nose, but also strawberries and blackberries. Delivered by a fine creamy mousse, this was a wine for slow drinking. If I had followed one sip with another after 30 seconds I would have missed the wonderful end-point of developing flavours.  So a lesson for me to be patient!

With which food would I match Bruno Paillard Nec Plus Ultra?

Nothing! Because it is slow drinking and subtle, I would not want to miss the pay–off of its slowly evolving palate, so would drink it on its own as an aperitif.