From Picasso to Pecorino Wine (not cheese!!)

As we sat supping our brimmed glasses of cava and running eyes over the tapas on the menu, Pia animatedly explained that the local wine in the Marche region, where she spends a good deal of her time, is not only undiscovered by mainstream drinkers, but is also delicious when paired with countless regional dishes.

This wine is rather confusingly called Pecorino, as in but not of, the cheese that is a household name. Having never heard of the wine, and feeling inclined to want to drink it at source, I accepted the gambit to travel to the Marche in search of a rich wine with a curious name.

I had never heard of this region before and so approached with an open mind. The area hosts truly beautiful towns. The town of Ascoli Piceno is high up nestled in the rising slopes of the Monti Sibillini national Park, a mountain range with snow caps with sweeping vistas across the fertile lands to the Adriatic Sea. The town Ascoli itself is incredible in use of travertine stone. The main piazza is picturesque with beautiful cafe’s where one can rest and enjoy an aperitivo or a minuscule espresso. In the evening, the delicious local wines such as montepulciano, rosso piceno or, as we are familiar with outside the region, verdicchio, are served with little dishes of olives fried in breadcrumbs, unique to the town.

A few key facts about Le Marché that will ensure a return visit:

Food produced in the region is fresh and delicious. There is seafood as well as incredible meats, fruit and vegetable produce. I was personally bowled over by the truffle used in local dishes. If you like picnics and exploring then a visit is a must!

Along the Conero peninsula, the beaches are beautiful, making this a great place to relax and bathe in the Adriatic.

An hour and a half inland there is skiing in the mountains right up to may.

The town perched on hills, surrounded by rolling countryside are hiding amazing treasures, as you’d expect in Italy. It takes very little to stumble up on jaw dropping renaissance altarpieces, Garibaldi’s pipe, an asteroid (see the Villa Vitali), Roman cisterns 2 thousand years old that rival the famous cisterns of Ottoman era Istanbul and, as we discovered in Fermo, a beautifully luxurious Palazzo B&B, with frescoed ceilings and sprawling comfort at easily digestible prices.

Of course, all of the above is accompanied by very friendly and lighthearted Italians who enjoy chatting, napping, lounging in piazza’s and helping out visitors who are seeking pleasure in their environs.

Pia and Peter Wadhams were able to spend a day and half with us on a very enjoyable tasting expedition. Pia had researched well and organised 3 vineyard visits. One was on the slopes of Fermo, another not far off at all and the third, up in the hills by Ascoli Piceno.

Why Pecorino? Pecorino comes from the Italian word for sheep, Pecora. This is why the famous sheep cheese, Pecorino, is so called. Obviously Pecorino wine is not made from sheep but it was, until the early 1980’s, the hidden pleasure of the shepherds who used to take their sheep high up into the mountains. Up there this particular grape variety could be found clinging to slopes and thriving quietly on the stoney slopes with warm daytime breeze’s coming in from the coast, replaced in the evening by cooler temperatures from across the snow-covered peaks. As Marco Cavaliere points out in our video interview, this variation in temperature is very important for the wine.

Back in the mid 20th century when wine growers were deciding what to plant in order to produce their regional wines, they chose the passerina grape variety based on the fact that it could produce over 20kg's per year of fruit, compared to the 4kg’s from pecorino vines. Thus quantity trumped quality and the the region became defined as a bulk wine producer.

This all changed back in the late 70’s and early 80’s when a few wineries started experimenting with the pecorino vine. They were impressed by its rich flavour, high acidity with delicious fruit characteristics that make pecorino from the mountains a very attractive wine indeed. 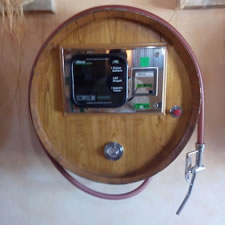