Churchill and Champagne tasting in London 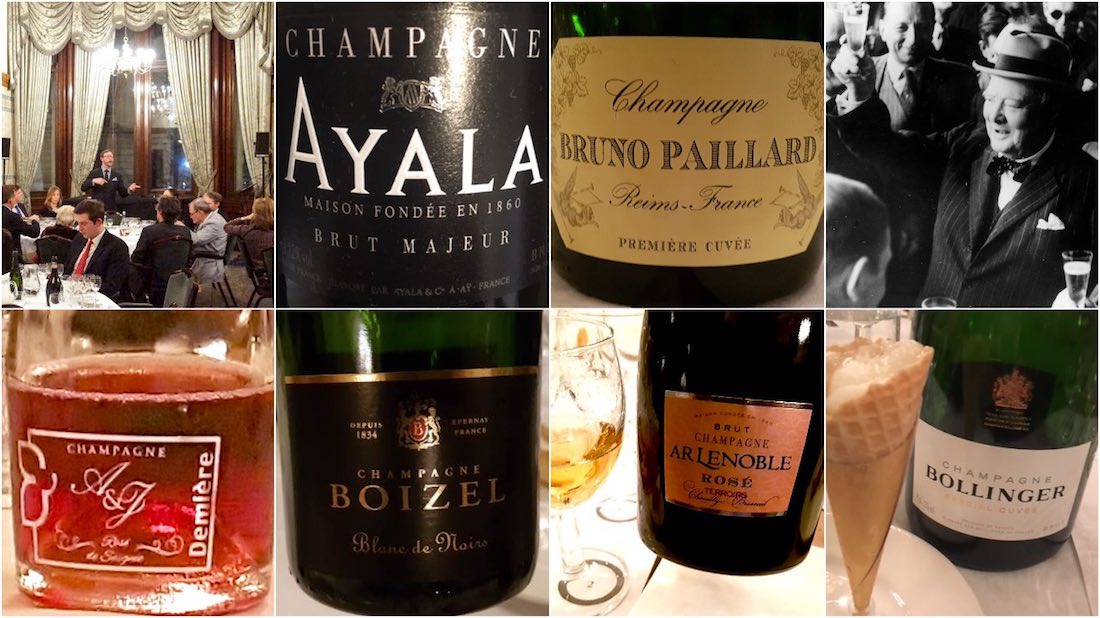 Over the course of the twentieth century, Great Britain saw the decline on all sides of her status in the world. At the time of the Second World War, when Britain stood against Nazi Germany, it was clear that it would take a summoning of strength, combined with a beguiling of allies, for freedom to triumph.

There was, at that time, one man, unanimously credited with steering the British people through the dark corridors of war. Winston Churchill needs no introduction! Yet still very few people are aware of how the great man utilised his appetites for the best food and wines to achieve his enormous feats of diplomatic accomplishments, that unlikely ever make the curricular of any embassy staff training programme.

Churchill’s absolute favourite alcoholic drinks were: the best champagne (out in front by a clear mile) and very good brandy. And so it came to myself and a few others to concoct an evening where we could tie several loose ends together in a quest for Churchillian “tummy-time” satiety.

Having been visiting the Champagne region for a quite a few years now, I feel pretty well acquainted with the range of styles and quality of the wine that are on offer. When people say “It’s just bubbles”, it is clear that they have probably never tasted a decent champagne.

My good friend and champagne educator, Carl Edmund Sherman had mooted the idea of coming to London to conduct a tutored tasting, and ideas were germinating. His wife, Catherine Heyrendt-Sherman, a scholar at the University of Reims, has recently published a book in France that is best described as a culinary biography of Churchill.

A discussion over lunch at the National Liberal Club (NLC) in Whitehall, where Churchill was a member for 15 years, centred around the idea of doing a fundraiser that could in some way combine the interests of the NLC, the Author’s Club (the historic literary members club housed within the NLC) and the ever-present desire for good food and fine wine.

The idea was very simple. We would collude with the chef and Catherine to come up with six Churchillian courses that Carl Edmund could pair with six fitting champagnes. For each course there would be a Churchill anecdote delivered by Catherine, followed by Carl Edmund’s in-depth notes and background information on the champagne.

The point of food and champagne pairing was to demonstrate how these are not mere bottles of bubbly but in fact, they are serious fine wines that can be paired, much easier than previously believed, with challenging courses, ranging for chicken broth to venison and lemon sorbet.

I have created a page for each course to give a little insight into how good these really were with feedback from several of the tasters present. I would like to extend a deep hearted thanks to our sponsors who contributed to such a great evening for approximately 100 special guests. We are sure Churchill would have been proud.

The Menu And Pairings: Churchill and Champagne, A Tutored Tasting: